I hadn’t planned to step out into the Easter holiday madness, but Today and tomorrow, ‘Linda’ returns to action on the FR. Nothing hugely spectacular but little Linda is the very first thing I ever took a picture of, so I felt a calling to do so again today. Unfortunately, today is miserable weather, and tomorrow I’m working!

I arrived at Penrhyn in time to see her arrive in the same spot I first shot her in 1991 at the age of 6, but disatster! Linda isn’t heading the train, it’s the diseasel Vale of Ffestiniog!

Disheatened I carried on walking up to Cei Mawr, in time to see Merddin Emrys on a vintage set, fluffed every shot mind. 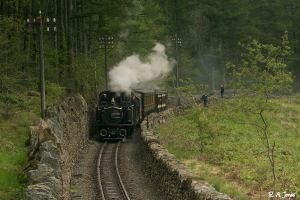 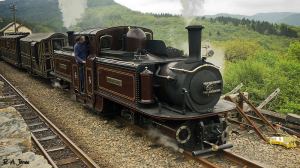 Then Earl of Merioneth came past on a down run, 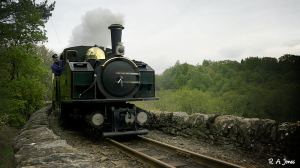 and finally, a rather shrill and diminutive whistle in the distance, follwed by the sound of a small loco working VERY hard, Linda appeared. Unfortunately the location was dark, so ISO 800 was the deal, but I managed to get her in shot at least.

On the way back down it brightened up and I managed to snap VoFf and Earl Of Merioneth again in better light on the bank between Rhiw Goch and Penrhyn. 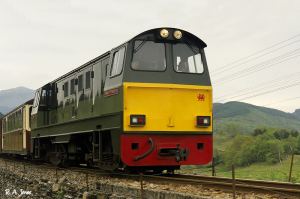 (if only I’d been a split second sooner on the shutter that power line would hav ebeen behind the chimney, d’oh!

All in all it was worth getting wet for!

With very changeable light today I went for a drive round Cwm Bychan, Cwm Nantcol and a quick detour up to Tomen Y Mur.

Certainly not in cameras! I’ve just purchased an old Pentax Super A film SLR, and with a 50mmf1.7 SMC on the front, the major shock is it’s exactly the size of my m4/3 GH1! Surely this can’t be? the GH1 is the smallest DSLR available (albeit it loses the mirror to achieve this), even regular 4/3 DSLRs are massive in comparison – yet here I am holding a 20 year old ‘Full frame’ tank, and it’s exactly the same size as my miniature digital system!

Seems the camera industry has had a bit of a trend reversal going on for some time in the last 2 decades, and has only just realised t trend in everything else for going smaller!

My Super A with Cosinon 40mm f2.5 pancake

Now then, on a more serious note – Film is loaded in the Super A and it’s ready to roll!