What a boring place! Turns out all the interesting buildings were demolished years ago!

Ah well, the weather was good and the view was fine. Made for a couple of rust filled exposures so not a total loss!

Well I guess it’s no secret. I’ve been hoarding old film cameras for a while, but not the old vintage collectable lark, no, functional useful SLRs.

So far I’ve had a few pas through my doors, OM10, OM2SP (still here), OM30, Pentax Super A (Still here), Pentax ME (still here) as well as an ever expanding collection of usually cheap off brand lenses full of fungus.

I’ve recently take to doing a small bit of testing with each one to see just how poor they really are. So far only one truly awful lens has been found – the Sigma 70-210mm f4.5/5.6 UCii. Terrible doesn’t quite cut it for this lens, and I’ve put it up against a truly off brand Focal MC 135mm riddled with fungus. (surprisingly not a bad lens!)

The results of this testing can be found here.

So what am I going to do about my addiction? Well nothing really. Anything I don’t like much goes back on ebay, anything I do like gets kept, and even if it doesn’t get used often, I will find a use for it. Take the Pentax ME. Never  a camera I considered owning, but I found this one with an SMC-M 40mm f2.8 on the front for a real bargain price. Thinking I’d just keep the lens I bought it. However I’ve fallen for the ME a bit. It’s so basic, little better than point and shoot with it’s permanent Aperture priority, but it has a charm about it.That’s now led to more gear addiction, and I’m now on the hunt for an ME super and an MX to add to the collection, both cameras I’d discounted from wanting when on the search for my Super A.

Oh well, you can never have enough cameras, or can you?

Rather than just aother geeky set of locomotive shots, I’ve tried to give a wider vie, give the railway a bit of context. In fact you could argue these are just landscapes that happen to have  atrain in them, and you’d be right really. 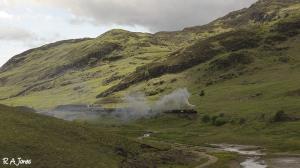 This first shot was a grab, I was still walking to my desired location and all I had on hand was a Zuiko 50mm f1.8 set at f2.8, hardly ideal and technically a failure of a shot (there is very little in focus!) but full of atmosphere! There’s something about that little lens that keeps me coming back to it!

Shortly afterwards, a down train came hurtling through, or as hurtling as you can get on the Festiniog. Same lens from the same location,but this time at a more suitable aperture of F8.

Excitement over for a bit, I managed to head on down to my intended destination. You see I’ve been trying to recreate a photograph of Linda running along the shore of Llyn Ystradau with the Molwyns behind, and I 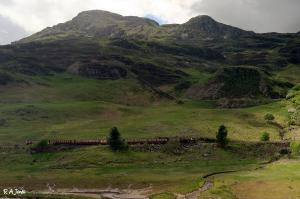 think I’ve finally found the location the original was taken from. However, it turns out a lot has changed in the 20 years since that photo was taken, Lnda is now painted black, Llyn Ystradau is much lower, and in fact no longer features and the weedy saplings along the railway embankment are now quite large trees! Not to mention the weather! So this attempt is woeful, but I’m getting closer to my goal!

Much better was this attempt to cath the next down train in good light. The sense of scle here is fantastic, there’s even some people on the shoreline, and the gathering clouds help to brng some atmosphere. This was shot through the Panasonic 14-45mm which shows a marked increase in contrast and also a slightly richer colour than the Zuiko.

This next shot shows the remains of the Moelwyn tunnel, the original one, there’s ctually a suprising amount of debris left here, including this 2 bolt S pattern FR rail chair. There’s also point or signal rodding, which I didn’t have a fast enough wide angle to cover in the way I wanted, but never mind. The rail chair shot was difficult enough!

One last shot on the way back, taken from the stile by the footpath crossing, shoing a rare glimpse of blue sky over Blaenau Ffestiniog! 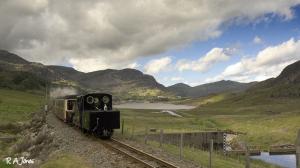